The 150th Birth Anniversary of Gandhiji on Oct 2nd was truly remarkable for the students of Skill in Village (SiV) at Ballarawad. For the first time in North Karnataka, a digital Lab has been set up by Deshpande Foundation in collaboration with ST Microelectronics Foundation (STMF) India.

The digital lab is to reach-out disadvantaged children from the rural community. With the launch of the program “Digital Unify for Kids (DU4K) called ”Tablets for Kids (T4K) course” students get exposure to a lot more funfilled yet interesting learnings. 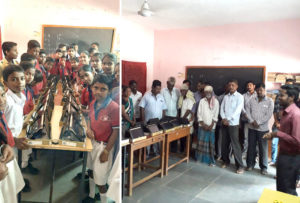 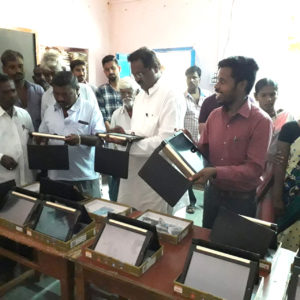 The course is structured around a 4×4 matrix

The digital lab was inaugurated by Girish Padaki, Block Education Officer (BEO) of Navalagunda taluk, Dharwad district, Karnataka. Addressing the gathering, the BEO was overwhelmed to know the kind of interventions that Deshpande Foundation is making to rural communities to bring the transformation. After interacting with the students of Skill in Village, he was all praises for the impact being created by the SiV program. 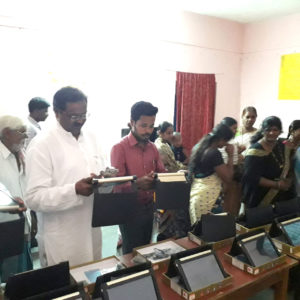 Once the two steps been accomplished, the course strategy is to address 4 complex skills

While addressing the gathering at the digital lab inaugural ceremony, Girish emphasized the importance of English knowledge in this very competitive and advanced world. “The skillful knowledge of English enhances the confidence hence he called the villagers to take the pledge to send their children regularly to school and thereby to Skill in Village Center to gain the knowledge.” Girish also pointed out that “the rural communities have deprived of quality education, efforts of the government alone will not yield any fruits thus the handholding collaboration with the organization like Deshpande Foundation brings the values in the system of approach.

“Because of SiV’s intervention, Ballarwada not only recognized locally but its identification spread across multiple states. Usage of technology and having adequate technical skills increases the level of competitiveness among the students. Setting up of digital lab has paved way for the students to reach their aims and goals high” added Girish.

Even the parents were happy with this initiative. Sharing his gratification Mr. Vinod Sharanwada, father of Pavitra Sharanwada, expressed  “I feel so proud to send my daughter Pavitra to SiV Centre. She has improved a lot and started speaking in English. When she speaks English I will be so emotional. I like to thank Deshpande Foundation and its SiV program for being part of her great learning.”

Another parent Shivakka Thalawar, mother of Rajeshwari studying in 8th standard says, “My daughter was not up to the mark but now after joining SiV she has improved a lot and she had overcome with shyness and actively participating. I am sure technology knowledge will enhance her confidence. We all the parents of Ballarwada are thankful for this initiative from Deshpande Foundation and its SiV team.