Sowjanya Pattankudi’s day went about like most girls her age; she would wake up, go for class, hang out with her friends, and get back home to her family. It all changed the day she took a walk near her village and saw a sight that most brush aside as a commonality in India – people crossing a road to avoid the sight and smell of open defecation.

Open defecation is a common sight in rural India. While the common reflex is to turn, avoid and walk away, Sowjanya and a team of young women from Chikodi taluk in Belagavi district, Karnataka, responded in a far more productive manner. They envisaged completely eradicating open defecation from their taluk and turning every village in Chikodi, into a model one.

This ambitious group took an oath to uproot this praxis from their taluk by constructing toilets and educating villagers about the importance of hygiene.

In 2014, the drive was spearheaded by Sowjanya Pattankudi, Deepika Lokare and Deepali Bhosale, young students from AA Patil College of Arts and Commerce for Women, Chikodi, and was supported by Deshpande Foundation’s LEAD Programme. The program aimed to foster leadership, innovation and forward-thinking in students by motivating students to work for a social cause. 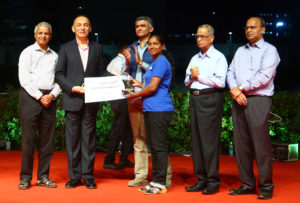 Four villages were identified initially – Jainapur, Borgal, Hirekudi and Umrani – to execute their plans. The first steps of the process included organizing rallies, conducting door-to-door surveys and carrying out awareness programs across these villages.

Sowjanya, recalling her experience of working on the project, said that a group of 30 young women from their college banded together for this social mission. To carry out the door-to-door surveys, they split into several groups to cover the maximum area in each village. The surveys spanned across several weeks, with the girls working after college hours, or during weekends and vacations.

The surveys aimed to find each village’s population, number of toilets currently available and yet to be constructed, the budget required, create awareness about government subsidies, understand the availability of space for further construction, and observe the various reasons behind residents’ reluctance to construct washrooms.

What the girls did not anticipate was the severe pushback from the villagers. Their resistance comes from generations of deep-seeded superstitions and irrational thoughts, which served as a major obstacle in the implementation of the project. Some of their disconnected justifications to prevent the construction of toilets included fear of upsetting deities, wastage of water supply, dirtying of house perimeter and the most common one, since their ancestors made do without toilets, there would be no present requirement as well.

“The most difficult task was to convince villagers to construct and use toilets. Many senior citizens of the villagers told us to stop this rally, calling it a waste of time and that it was against customs,” Sowjanya said. It was bewildering to hear stories where women in these villages would control the excretion process throughout the day, and wait till dusk to go into the open fields. “They are not aware of the infections and diseases that can be caused by this practice,” she said.

Gajabar Mulla, an agriculturist from Umrani said, “We know that open defecation is a bad practice, but due to our poor economic condition, we could not construct toilets and had to wait for dusk or before dawn to attend nature’s call.” He added that while the men somehow managed, it was the women who suffered from infections and other diseases – “Even when we would visit a doctor, they would ask us so many questions which we could not answer.”

Laxmi Gaju Dannavar, a garment worker and resident of Umrani, shared that she used to defecate only after dark, and would have to flee on some occasions due to fear of snakes and insects. “Due to my shy nature, I would find it uncomfortable to talk to my husband and others in the family. I used to hold it in for long hours and never revealed the problems I faced because there were no toilets nearby,” she added.

Once the seniors graduated, they handed over the reins of the project to the next batches, to ensure the continuance of their social cause.

Vimala Kadam, a final year BA student took up the project immediately after joining the first year. What drew her towards the cause was the plight of senior citizens, who had to wait till dusk, or rise early in the morning before the sun just to attend nature’s call. The strong odor made it a common practice for passersby to avoid certain routes and lanes. “In some villages, it (open defecation) takes place near hospitals and temples. For this, I decided to continue this project which my seniors started in 2014,” Vimala explains.

By working with the Gram Panchayat and their developmental officers, the Zilla Panchayat, and their college’s Lead Programme coordinator Jayashree Nagaraj, the young women successfully carried out surveys, convinced villagers about the importance of constructing and using toilets, and managed to complete construction of 1,775 toilets across four villages. Under government schemes, after an individual completes construction work with money from their own pockets, they can claim the majority expense back by providing valid ID proof – the government subsidy pays between Rs 12,000 – Rs 15,000, while the remaining amount of about Rs 6000 is paid by the owners. Moreover, about 60 houses collaborated with a private company and got their toilets constructed for the amount of approximately Rs 17,000, down from the original cost of Rs 25,000.

Discussing the project, Professor Jayashree Nagaraj says that convincing villagers was a tedious task. As an alternate method, in one village, residents were told that their ration cards would be discontinued if they refused to construct and use toilets. In another, the group raised awareness about unknown government schemes like free construction of cattle sheds as incentives to motivate villagers to allow construction and use of toilets. “Often, villagers scolded our students badly and warned them not to enter their village. But still, our girls never gave up as they had made up their minds to make villages of Chikodi, open defecation-free”.

Village authorities acknowledge the effort and dedication put in by these young women.

Shivanand A Desai, Ex-Panchayat Development Officer of Jainapur, is all praises for this girl gang – “All these girls made our job easier by taking several initiatives. In Jainapur itself, 250 toilets were built in a short span of time because of these girls. They suggested community toilets in slum areas, where there is limited space for separate toilets in individual houses. The girls were also able to educate villagers about subsidies provided by the government under the Swachh Bharat Mission.”

Santosh Kattimani, Umrani’s panchayat development officer, says, “Because of their determination and patience, we could quickly build a good number of toilets.” Before the project’s inception, villagers remained disinterested and ignorant about the ill-effects of open defecation on health, and it would be further difficult to interact with women about the issue, Kattimani explains – “The girls explained it very well to the villagers, especially to women, on how badly it (open defecation) can cause various diseases like diarrhea, worm infections in the intestine, typhoid, cholera, hepatitis and others.”

Recognizing Vimala Kadam’s effort, the taluk Panchayat and local election commission have made her an ambassador for the mission. She has been assigning 16 villages to help eradicate open defecation.

In 2014, around 250 toilets were constructed in Jainapur, 200 in Borgal in the year 2015, Hirekudi had 50 in 2016, and about 825 between 2017-18 in Umrani. Hats off to the girls and faculties of AA Patil College of Arts and Commerce for Women, Chikodi for supporting this mission and sticking to it until the district is really open defecation free.

Igniting the sparks in the primary school students