The two-day conclave of micro-entrepreneurs was a refreshing and much-needed event for 150 Navodyamis at Varanasi, which held on April 26th and 27th. 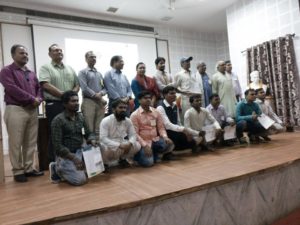 At the second day of the Summit, that is on 27th five Navodyamis bagged the “Best Navodaymi Award” which includes a cash prize of Rs. 50,000 and a certificate.

Best five Navodyamis were awarded at the
‘Navodyami Summit’ held at Varanasi.

Mrs Alyssa Newlon, Co-founder Milaan; Mr.G. Hariharan, Head for Corporate Relations and Sustainability and Mr Anil Verma, Founder PRAN were on the jury panel. The organizations pitched their ideas for better and sustainable solution in the sectors like Education, Health, Livelihood and Technology. 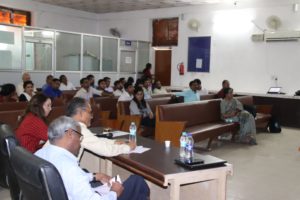 The guests answered several questions asked by the participants and interacted with them regarding the goals and philosophy followed by the Ek Soch Sandbox. They also explained how Sandbox can contribute in nurturing young social enterprises.

Entrepreneurs pitching their ideas in front of the founding
team of Ek Soch Sandbox and jury member at
Sandbox Samvidha event held on 27th April at Varanasi
Interesting Visits & Inauguration.

The founding team of Ek Soch Sandbox also visited Nand Ghar, a rural creative School for Children, Nageypur Village to understand the schemes adopted by the model village. The team inaugurated ‘LEAD Adda’ – a platform for Leaders to discuss the problems and come up with an innovative solution for the problems.

Igniting the sparks in the primary school students